I'm not sure if you're intentionally distorting what I said or just being sloppy when you say that I'm "critical of wokeness" when I clearly said the AP tweet was an example of "over-the-top wokeness".

Which one is it?

The Twitter Files reveal a massive effort by government agencies and officials to interfere with speech and information where no laws were claimed to have been broken.

oh, they reveal no such thing.

nohero is correct. The Wall St Journal lied about the purpose of the document which had been out for 6 months before they reported on it, and as such people got all fired up about nothing and a well-intentioned document had to be removed. External pressure from people who got their fee-fees hurt by those lies forced them to remove it, ergo the list was canceled by an act of over-the-top-wokeness.

Because the tweet and the initiative caused unintended offense. Acknowledging reasons for disapproval and acting on them, as the AP and the Stanford initiative did, is woke.

Yet you’re critical of wokeness.

The coherence eludes me.

(If you had said, “Yeah, I thought the AP had rescinded its guidance, too, but I was mistaken,” that would have been coherent to me.)

Don’t mind me, I’m just enjoying the unintended typo in relation to the Grauniad.

The context is US unilateral withdrawals from ABM Treaty, INF Treaty and Open Skies Treaty and Iran Nuclear Deal (in which Russia is a key signatory):

The US withdrew from the ABM Treaty under Pres. G.W. Bush, and the INF and Open Skies treaties and the Iran Nuclear Deal under Trump.

In general, I favor Democratic administrations over Republican ones, and these are examples of why. Something to keep in mind every four years.

In this case, the NY Times reports: "When Russia suspended inspections, it said that U.S. sanctions imposed
on Russia after it invaded Ukraine made it too difficult for its inspectors to get access to the United States. The State Department said that was false." No reporting on why State said that was false.

Yes, this is the response I anticipated you'd give. The State Department says Russia isn't prevented from doing inspections in the U.S. But Russia won't send inspectors here, and won't allow American inspectors there. And of course, your conclusion is that the blame lies with the U.S.

Biden could have reinstated the Iran Nuclear Deal with the stroke of a pen. He didn't. He's made no effort to reinstate the other treaties that the US negotiated with Russia and quit. He's just embracing Bush and Trump.

I'm open to hearing State's argument how Russia, despite the multitude of sanctions against it on visas, air travel and air space, would have equal ability to move its inspectors to US sites as US would have moving its inspectors to Russian sites. But NYT didn't report that, merely stating that Russian complaints are "false".

There is an exemption to the Russian flight restrictions for state aircraft operations granted a diplomatic clearance by the U.S. State Department. I assume that it was this exemption that allowed Lavrov to attend the U.N. annual meeting. Although the visit by Russian inspectors may not be a diplomatic mission per se, the U.S.State Dept. and FAA would almost certainly permit Russian inspectors flying Russian aircraft to enter the U.S. for inspection purposes.

"The NOTAM contains exceptions for aircraft engaged in humanitarian or search-and-rescue operations specifically authorized by the FAA, state aircraft operations granted a diplomatic clearance by the US Department of State"

That's a good start, and presumably the State Department could provide something like this as well as guarantees regarding travel within the US and crossing other airspaces banned to Russian flights.

Presumably the State Department got other countires that banned Russian flights to allow Lavrov to fly over their airspaces.

eta - If Russia really wanted its inspectors to enter the U.S. they could.

I'm pretty good at SB. I get to Genius nearly every day. But I have to admit to myself that getting a QB without the hints is going to be EXTREMELY rare for me. If I really want to get QB I could use the hints. When I did I'd get it a couple of times a week. But the folks here convinced me it's not enough of a challenge

I guess on my own until I run out of gas and then use the hints. There is no shame in using the hints, IMHO. My goal is "Genius" each day and I'm probably 90-95% successful. QB is a different story, I probably average a 3-4 times per month.

I am charmed yet skeptical about the idea that there might be a bottom. 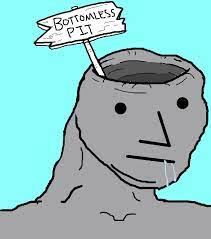 PVW, thanks for teaching me the term ‘jawboning’.