The Normalcy of the Biden Presidency . . . .

Is killing the politics section.  But I'm ok with that.  What a difference it makes when you don't have a habitual liar in the driver's seat.

No more outrage of the hour.

What’s normal to some can be boring to others. In a society where lies, fantasy tv shows, ridiculousness, casual violence, hate and bigotry are all acceptable as “reality shows” for entertainment, normalcy is not good sources of income and ratings.
The other guy knew all about feeding the bored minds of people. He was completely abnormal, and he succeeded by keeping himself relevant through shock entertainment. He was drawn to drama his entire life. His one ambition life was to become America’s greatest drama king. He had the power to say and do things the ordinary people couldn’t. It’s no wonder his supporters are just like him. He feeds their boredom. He makes them feel that the way they see life in America is exactly how he sees it. They are essentially “kindred spirits”, who share the same abnormal thoughts. Claim you are being a victim, then demonize the people who you think are victimizing you.
I have seen people who were on this board years ago, using this same thought process to make their cases as to why they believe the things they do. They acted very much like the other guy does, love to dish it but can’t take it. Sulking and leaving the sand box, only to return with their little buckets. After years of masking how they truly feel about people who are different, after years of faking it to keep their image of “normal” , they finally got the other guy so they could exhale. It was a religious experience so to speak. They could finally be abnormal on Facebook instead of acting like normal members of a community. Some have surprised me, others haven’t.
Biden might be boring, normal, catholic... just like the people who long  for the entertainment of the other guy. Biden doesn’t feed their minds, he’s actually feeding their souls, but he’s having a hard time seeing down there...

There's a Trump-sized hole in the news cycle, which I think is the reason for all the Tiger Woods coverage.

There's a Trump-sized hole in the news cycle, which I think is the reason for all the Tiger Woods coverage.

That, and the immense popularity of Tiger Woods.

Trump aside, we had a year of merrily discussing and debating potential Presidential candidates. Before you know it, we'll be examining Mid Term nominees and fretting over holding onto the House and Senate.

SCOTUS is on my radar. South Carolina passed a new abortion law which was challenged the next day. I'm thinking there will be a big push to get Roe overturned before the Dems get a chance to change the court ballance. Not saying they will succeed but I think the GOP will give it their all.

I was very impressed by the Covid memorial done by President Biden this past week.  I was especially impressed by how empathetic he was to the families of covid victims.   I think his words gave comfort to many people.

It's also really comforting to have Fauci and team give regular press conferences.  And we don't have our president touting bleach and repeating that Fauci is a disaster.

The best thing that Biden can do, is to show that a competent government is actually a good thing, despite what all these conspiracy / libertarian clowns are saying. And I hope that the Covid relief bill will go a long way in that direction.

Interesting. A sizable chunk of Trump voters agrees with Biden's stimulus, as they should because it will help them. Maybe some republican voters will stop voting against their own self interest. One can only hope.

Things are certainly back to normal 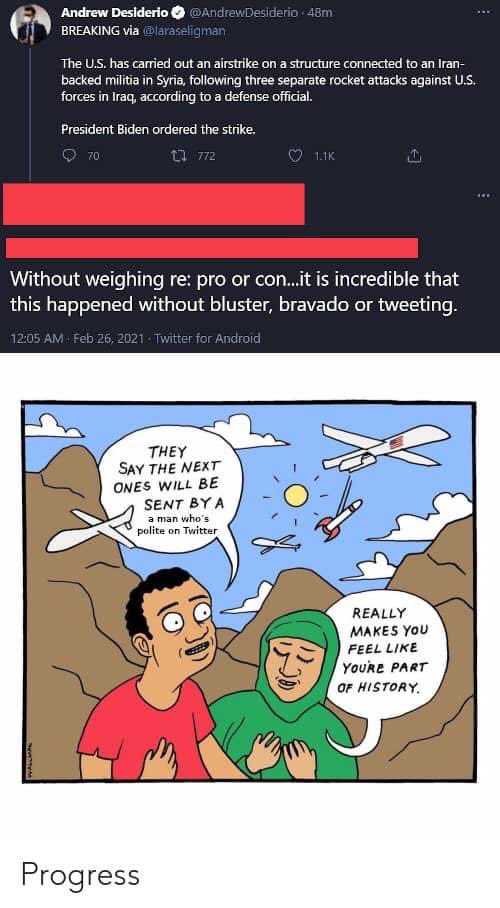 Is killing the politics section.  But I'm ok with that.  What a difference it makes when you don't have a habitual liar in the driver's seat.

There was a deafening silence about Biden's speech last night about the landmark legislation he signed yesterday.  The fact that he didn't sound like an egomaniac and sticks to facts probably contributed to that.

I am now wondering if the border crossings are going to be an unfolding drama. I heard today that it is deliberately not being referred to as a crisis. The numbers are pretty wild and I'm sure the Republicans are rubbing their hands together in delight.