"In the wake of Elon Musk buying Twitter Inc., a tide of slurs and racist memes swelled on the platform, sparking concern that the site is entering an era of hateful speech.

Dr. Rebekah Tromble, director of the Institute for Data, Democracy, and Politics at George Washington University, said as soon as Musk took control of Twitter, online trolls began encouraging each other to push the boundaries on Twitter.

“Unfortunately, this spike in hateful language is entirely predictable,” said Tromble, who has studied Twitter for years. “For most of these trolls, it’s a game. But for others, including certain political influencers, saying hateful, outlandish things helps them increase their audience and make money. And they see this as a golden opportunity to gain even more attention.”

The flood of speech underlines the difficulty Musk faces in fulfilling his promise to restore people’s ability to speak freely while managing the palatability of the platform for advertisers, to whom he pledged in a letter Thursday that Twitter would not spiral into a “free-for-all hellscape” under his leadership. Musk has repeatedly opposed Twitter’s enforcement strategies, such as banning some high-profile accounts permanently.

Musk tweeted that Twitter will form a content-moderation council that includes “widely diverse viewpoints.” Major decisions on content and account reinstatement are on hold until the group is convened, he said. A Twitter spokesperson added that the company has a hateful conduct policy and it had not made any changes to the Twitter Rules."

eta - The article mentions that Musk pledged to advertisers that Twitter would not spiral into a "free-for-all" under his leadership. However, Musk said that he plans to cut-down the need for advertisements by at least 50%.

So far, it appears that Elon Musk is one of the top trolls testing his new hate speech policy on Twitter.  Maybe he can submit his case to the new policy committee to see if he should be banned.  In response to a post by Hillary Clinton yesterday, he retweeted an article from a dubious source suggesting that Paul Pelosi may have been involved in consexual sex with his attacker, and commenting by saying there is a small chance that the article could be true.  Ironically, the source, the Santa Monica Observer, had reported in the past that Hillary had died and that her fake double was campaigning for President, among other falsehoods.

I gave up on Twitter because of its horrible hate speech years ago. I still have an account and look at cute doggies, but that's about it.

If it hasn't already, Twitter will spiral into a cesspool.

I hope it goes bankrupt. I'd love for Elon to take a $44 billion loss.

If it hasn't already, Twitter will spiral into a cesspool.

I hope it goes bankrupt. I'd love for Elon to take a $44 billion loss.

Several people with verified accounts are pretending to be Elon Musk, and apparently Elon doesn't like it.  So much for being a "free speech absolutist."

But one response to Musk’s tenure has seemed to really get under his skin: the verified impersonators. Some prominent Twitter accounts have utilized their verification privileges to pretend as if they’re Musk himself—changing their display names and profile photos to playact as their new overlord, with tongue plainly in cheek, tweeting remarks he’d clearly never say. Among them: actor Richard Sommer, former pro footballer Chris Kluwe, cartoonist Jeph Jacques, journalist Christopher Hooks, comedian Kathy Griffin, author Manu Saadia, and more.

He thinks he has a sense of humor. 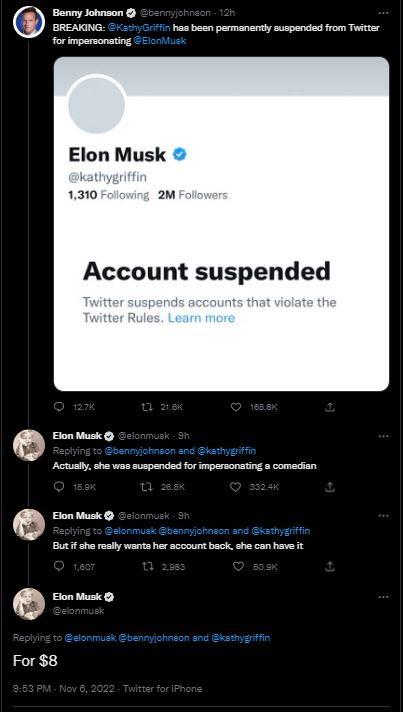 "We criticize Hollywood for lazy tropes but our two main antagonists right now are a former KGB agent with a penchant for poisoning and an emerald mine heir who wants to live on Mars. If these were Bond villains they’d be dismissed as caricature."

In order to add a comment – you must Join this community – Click here to do so.
Start a new discussion