The cop has not even been arrested yet.

I don't think I can blame people for lighting the city up.

Luckily, our Prezident will lead us out of it by killing more people to save towels from Target.

Putting out fires, literally, with gasoline here: president threatening to override the governor, mayor and somehow give orders to start shooting people in the streets of Minneapolis? https://t.co/z2lidarh7W

Looks like the MPD is a real class outfit. "killology" - your word of the day.

Folks outside Minneapolis, please understand this: The police here barely respect the authority of the mayor’s office at all. They answer to their union. At least 4 mayors in a row have been in a state of cold war with the police — and the cold war just went hot. https://t.co/TqnW1KABlW

Here's Kroll, the Union President, at a Cops for Trump rally in Minneapolis.

The Minneapolis Police Chief, Madaria Arrandondo, is outstanding. He took over two years ago when the previous police chief resigned in the wake of a killing of an Australian woman by the police officer. Here is Chief Arrandondo  at yesterday's press conference:  (Our son is in St, Paul, I'll have to get the latest from him later today.)

State Police arrested a CNN crew this morning. (or maybe just a single reporter?) Don't have details about the arrest, though I did see that one guy arrested was  black.

The Prez of CNN called the Guv and the Guv apologized and said it shouldn't have happened. Don't know if they've been released yet.

ha, the camera was arrested too, but the cops didn't turn it off. video but no sound so far. not clear who is carrying the camera.

screen shot from cnn. the gestapo marching in on the left, the wayward camera on the right.

film of the arrest

That was me. And I don't know the answer.

They should disband the whole department and start over.  The live IG reports and video are horrid. The police are intentionally inciting peaceful protesters by driving by and spraying them with pepper spray.

And as far as I see the majority of the protesters are white.  The murder of George Floyd is bringing people together in ways that I have not seen for decades.

How about the PD in Maplewood / SO?

This is from yesterday’s protest 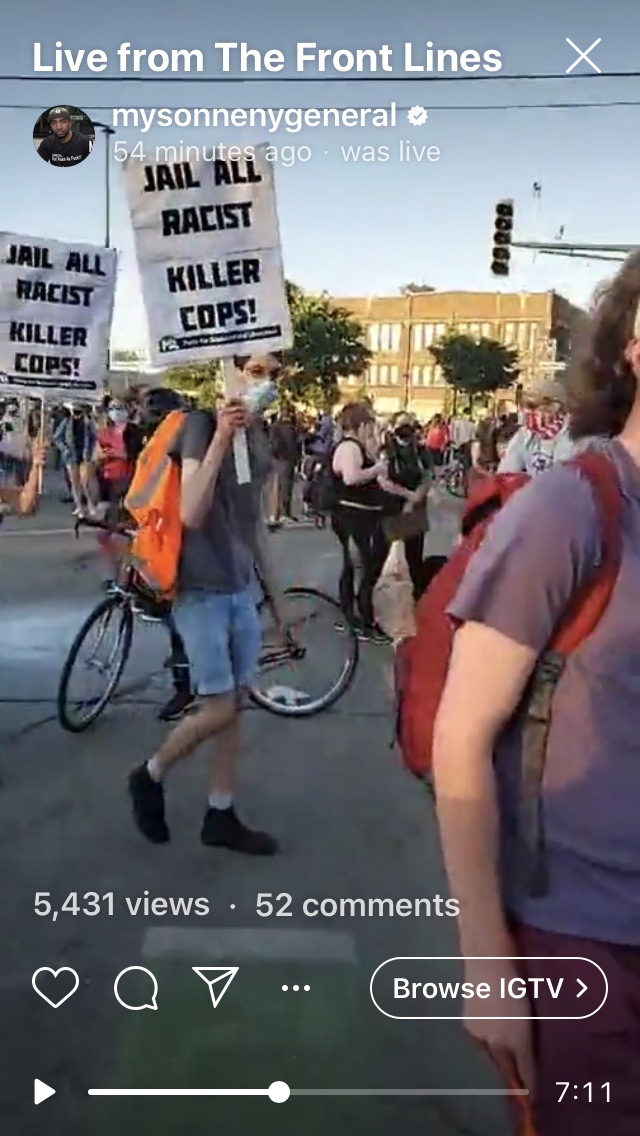 Sadly, many of the stores being looted and burned are the stores that people in these communities depend upon. Last night, a  pharmacy in St.Paul that dates back to 1918, was totally destroyed by fire. I'm familiar with that pharmacy. The reports say that 20 cars without license plates, so that they can't be identified, are driving around St. Paul, breaking into businesses and looting.

"St. Paul Mayor Melvin Carter and Police Chief Todd Axtell said groups of young people were traveling around the city in groups of up to 20 vehicles — many without license plates in an attempt to go undetected — and breaking into ubusinesses and looting.

But Carter said his plea was that people channel their energy toward honoring Floyd and preventing something similar from happening again."

At Trump rallies I’ve reported there’s no louder hate cheer than when Trump says “CNN.” This video of militarized troopers arresting POC CNN reporter & crew is a Trumper wet dream — and a very bad moon rising for any semblance of democracy. https://t.co/IitVGJBLXu

You're asking why groups representing organizations of largely white men, who have a mandate to use violence in the defense of property, hold so much power?

Police unions are generally counterproductive organizations for society at large if you ask me. They stand behind cops as their first, second and third option. “He’s a good cop” is the usual PBA spokesman comment in an article about the latest egregious cop behavior.

Best thing ever as a counterbalance to insular, cronyism-steeped and corrupt police unions: the democratization of mobile phone video.

Why on Earth don't they just arrest the cop for once?  Or do they want to deal with the uproar now before he's found not guilty at trial?

So, for extra credit what former President first came to the Nation's attention when he broke up a strike by policemen?

Minnesota is one of the few states that has been experiencing a rise in COVID-19 cases and the concern is that the protests will trigger a surge in new cases.

I'm watching Gov. Tim Walz at the press conference - he is really good.

eta - John Harrington, MN Department of Public Safety Commissioner - he's impressive. I think that residents of the Twin Cities can feel that their cities are in good hands.

Here's the problem.  A significant portion of the electorate gets dishonest news coverage like this.

Fox News anchor reports the CNN arrest like this: "Police are saying the crew was asked to move and they refused, CNN is denying that." Ummm, the whole thing was caught on TAPE! You can hear Omar Jimenez offering to move the crew. pic.twitter.com/I1guinRwQJ

Trump has a news conference about China at 2:00 PM. You can be sure that he'll be asked about Minneapolis and his response will not be helpful.

So, for extra credit what former President first came to the Nation's attention when he broke up a strike by policemen?

I cheated and  looked it up.

This is the complaint charging Derek Chauvin with murder of George Floyd:

Here's Kroll, the Union President, at a Cops for Trump rally in Minneapolis.

Bob Kroll.  Hmmm, Kroll.  From where do I recognize that name?  Any chance there's a family relationship?

Minneapolis allows the use of knee-to-neck restraint, even though most experts say it's dangerous.